Deaton Vale is a walled city on the coast, with a keep looking over it. The residents here were primarily farmers, but the keep housed a small garrison of warriors called The Hird.

The walled city consists of  nine houses, a well, and a separate walled keep with two towers. The city wall is made of cobblestone, and is roughly 9 blocks high.

Deaton Vale was founded in 76 AC by Malora Deaton of the Vale Matriarchy. Malora was a devout New Thaumaturgist, a religious group that believes magic is the main manifestation of God. She set out to found a new center for worship.

In 75 AC, Malora Deaton established a strategic friendship with Kingpriest II, a Hirdsman. The Hird are a knighthood of horse-riding warriors, religious in nature, that seek glory and worship through combat and martial arts. This friendship lead a group of The Hird and Deaton’s Thaumaturgical followers to set out together.

Deaton Vale and Deaton Keep were built quickly. The combination of the protective and offensive power of the Hird knights, with the farming skill and nurturing nature of the Thaumaturgists created a thriving community. Within a few years, Deaton Vale was a center of peace and skill. People from all around Irrupt traveled here to study, worship, and train in martial arts.

In early 91 AC, Deaton Vale suffered a plague that killed more than half of the inhabitants and devastated livestock. Wolves became common predators outside the walls, often attacking and killing travelers on pilgrimage to the settlement. Each year after that, annual harvests grew smaller. Those who were well, moved to Minos or Tir Gire. Those who couldn’t make the move, stayed as long as they could, but within 5 years, all the inhabitants had gone missing, or died of plague. Zombies are often found in the settlement, although the buildings and wall have remained largely intact. 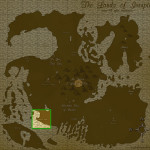