Crowbere is a walled fort settlement on the main road in a taiga biome.

Crowbere was established by the Guild of Verses, a starkly non-religious group of merchants from across Irrupt. The Guild of Verses controlled nearly all continental trade from 20 AC to about 90 AC. Although much diminished, there are members of the Guild thriving today throughout Irruptia.

The Guild of Verses protected their members through rigorous quality controls, political influence, bribery, and covert use of force. They provided public festivals and holidays, helped build wells and city fortifications, and most significantly created a road system linking the separate regions of the continent.

In 53 AC, the group of rogues inside the Guild, responsible for some of the darker and more violent activities, separated. Calling themselves The Beggar Kings, they relentlessly targeted the Guild of Verses, specifically travelling merchants on the road.

Members on both sides were often taken prisoner. Crowbere is home to what looks like an unassuming dungeon. Adventurers tell of a crevice in the floor that leads to a larger prison complex, complete with a court, prison, and torture chamber.

As trade risks increased, merchant and thief profits declined. Memberships in both guilds fell, and the fort of Crowbere diminished in stature and supplies. The Guild of Verses formally renounced the property in 83 AC as unsustainable.

Today, Crowbereis an echo of its former prosperity. Merchant stalls still line the center courtyard, flapping in the breeze. The guardtowers are empty, and are cloaked in vines. Adventurers note that fires are sometimes seen from afar, though what creates the fires and then puts them out is unknown. 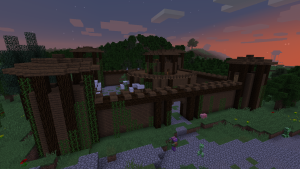 Outside view of Fort Crowbere 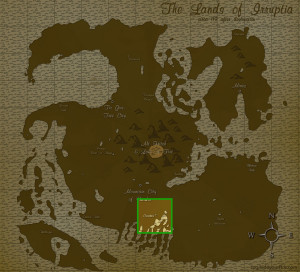