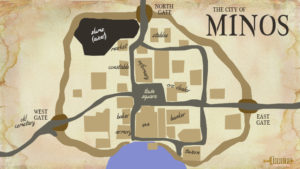 Minos is one of three Adventure Cities, Adventure Areas filled with shops, buildings, player-buy-able real estate, and fairly safe from mobs. Players begin their journey in Irruptia just inside the city.

Founded in 345 AT by disgraced knight Sir Marcus the Grey, the foundations of the city were set in pursuit of justice and nobility. Marcus’ dedication to equality among all citizens rapidly increased the population – refugees from other settled areas quickly migrated to Minos. Seeing the need to serve the population, Marcus first built the waterfront to help ships bring much-needed goods to the city. A deeply loved and respected leader, he established a city council from a spirit of servant-leadership, and left them to nurture and grow the community. He designed and built the cities sewer infrastructure. Then he dedicated the rest of his life to building the walls and lightning reactor coils to protect the citizens. He was buried deep beneath the city in the catacombs, and the citizens mourned his passing for weeks afterwards.

Those contributions helped Minos grow into a trading powerhouse. Farmers found fertile land for both crops and livestock, and with easy access to ocean trading routes and ample natural resources, Minos became a necessary stop for merchants across the continent.

Perhaps the greatest contribution Minos has made to Irruptia was its most famous citizen, Peca. In the years just before The Collapse, her influence on daily life in Minos grew significantly. A powerful mage as well as gentle philosopher, she established a Tower of Sorcery in Minos where many came to study. It was here that Peca studied dimensional magic, and discovered how to create portals to both The Nether and The End. Sadly, her influence was cut short by her apprentice Ciro. A few years before The Collapse, Peca disappeared when Ciro stole her portals to The Nether and The End. When Ciro reappeared, it was with great power – he declared himself Peca’s heir, disbanded the Tower of Sorcery, dismissed all its students, and shuttered the building. He then left for the Glass Library in the Tibald Mountains.

The city structure was relatively untouched during The Collapse, and the citizens largely carried on as before. The exception is the complete removal of the Tower of Sorcery. A powerful, magical force removed it from the city on the night of the Collapse. Although the rest of the city structure remained intact, Minos’ influence on the rest of Irrupt declined from there. Trade routes became more dangerous, and when merchant power centralized in the Guild of Verses years later, the group made an intentional effort to prevent Minos from attaining significant trading power again.

Combined with famines and plagues in the years following The Collapse, and Minos has struggled to retain her former glory. Today the city is largely self-sustaining, although many areas have fallen into structural disrepair. It still serves as an important trade route, and many new adventures show up at her walls regularly. The seaport is still maintained, and fishing has become the largest local industry.

Priests’ Inn, Seaward tavern, The Aqueduct, Lighthouse (on the point), The Sewers, The Catacombs.