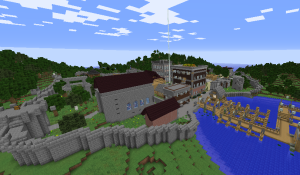 Once you’ve requested an invite code, you’ll be put on the waiting list. At some point, we’ll send you an invite code through email.

With that code, come back here and go to About >> Activate Beta Access. You’ll be prompted to create an account, and you’ll receive a confirmation email. At this point, you’re whitelisted and can join.

Point your Minecraft client to server IP play.hideyourfire.com:25566. You’ll start in The Landing. Here, you must choose a class before you go through the portal. You may pick warrior, rogue, or mage. Each one has different starting abilities, and each one can level up for more abilities later on. For now, just pick one.

Next, open the chest. It contains a wooden sword, leather chest plate armor, two loaves of bread, and an iron nugget. Take these, and run through the water portal.

You’ll be just inside the city of Minos. This is the starting city, and is reasonably safe from mobs. Explore the city a bit, but remember this: the gates close at dusk. If you’re trapped outside, you can always go around the walls to the ocean side, and swim into the city through the docks.

Since you won’t have any money to buy goods, food, and weapons, try earning a little cash during the day. Go out into the woods and hunt animals. You can bring back the raw meat to sell at the butcher. If you do manage to kill any mobs, and they dropped a head, you’re in luck. There’s a bounty on mob heads. Sell them to the constable, and you’ll get even more money.

Most players sleep at the infirmary when they first get started. There’s nearly always a bed there, and it’s free. As a bonus, the infirmary heals you when you’re near a bed. You can rent a room at the inn once you’ve gained a few more coins.

Your first goal should be to do a simple job – either hunt animals for meat to sell at the butcher, or hunt mobs at night for heads to sell to the constable. Use the money you make to buy food, replace your wooden sword when it breaks. A stone sword is nice, but an iron sword is going to take some work to accomplish.

There’s many other things to explore – the bank, the tavern, sailing, all the lands outside the city. But for now, try to stay alive and make some money. Play it safe, and soon you’ll be comfortable with the lands and able to strike out on your own. Good luck!